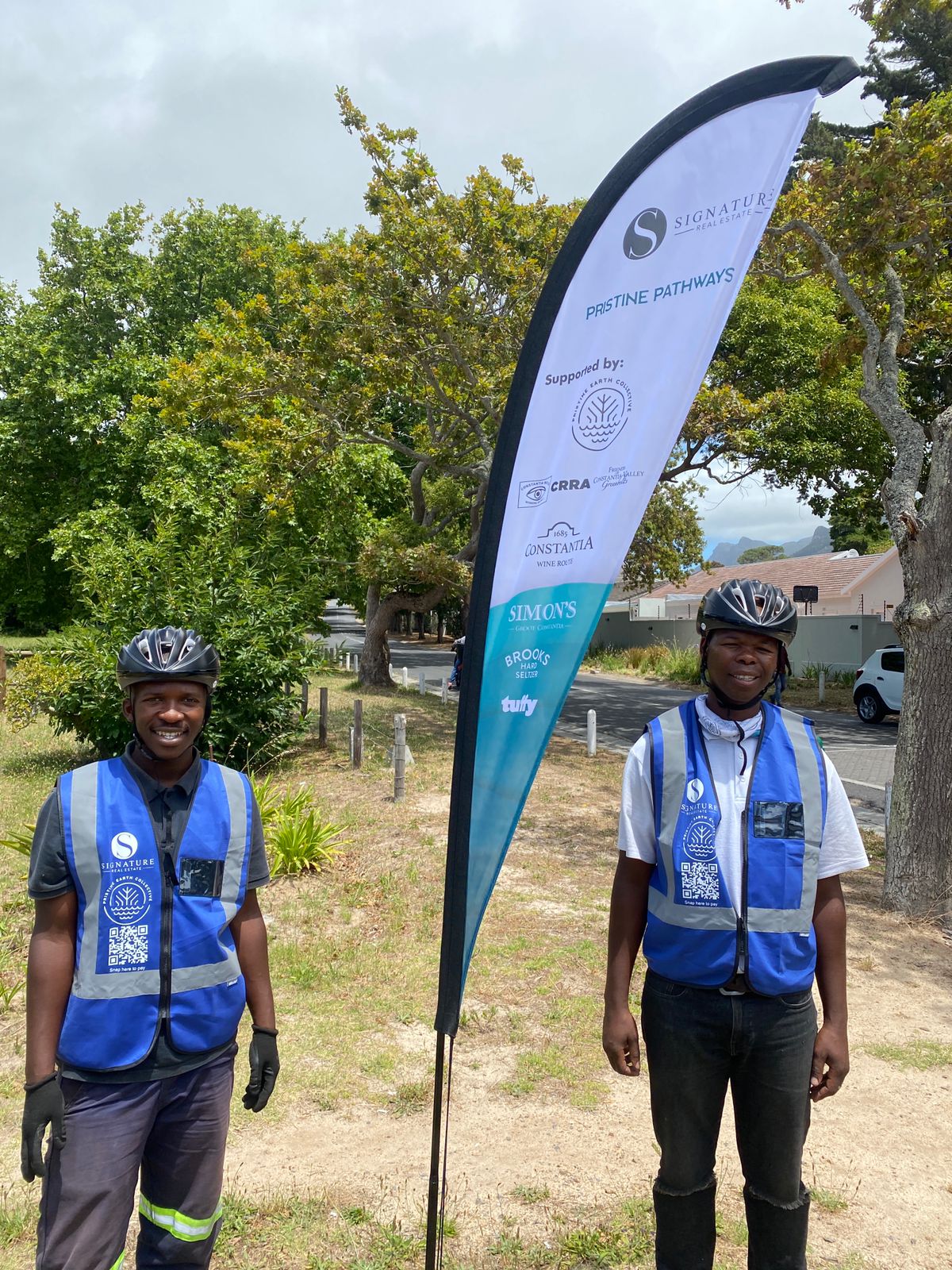 The Pristine Pathways pilot project launched on 2 November and thus far has been running successfully, with over 100 bags of rubbish collected over the first 2 weeks.

Thando Dlokolo and Makhasela (Ernest) Mbata make up our team of diligent and keen workers, cleaning the streets and keeping their eyes peeled for any suspicious activity. They are averaging about 4-5km per day on foot and collecting an average of 20 bags of waste per day. The majority of the waste is coming from the main roads, with the smaller residential roads being very clean. We will, however, still explore these roads and any other hotspots identified by our partners. We are seeking the sponsorship of 2 bicycles for the team, which will enable them to cover more ground. Please get in touch if you are able to assist.

One day per week the team cleans up in Gugulethu, removing about 30 bags of rubbish a day! This will make a significant difference to the neighborhood!

The pilot project is set to last for 3 months (until the end of January 2022) but we are hoping that we can gather enough support from both corporates and residents to make the project permanent by that time. We look forward to clearing away lots of rubbish over the next few months (and beyond!).

The project has continued into December 2021 with great success.

Over the week from 29 November to 2 December, the team removed 92 bags of waste from the streets of Constantia and then went on to clean up 42 bags of rubbish from Gugulethu on Friday 3 December.

Further good news for the project in the first week of December is the generous sponsorship of 2 bicycles for the team by the Pedal Power Association. This will help Thando and Earnest increase their reach throughout Constantia, as well as increase their efficiency since less time will be spent in transit. We are truly grateful for this sponsorship, as well as to all of the ongoing project sponsors, without whom, the project would not be running: Signature Real Estate (our headline sponsor), the Constantia Watch, the Friends of the Constantia Valley Greenbelts, the Constantia Residents and Ratepayers Association, Simon’s Restaurant, and the Constantia Valley Wine Route, as well as Tuffy for supplying waste bags. We are also grateful to all the residents supporting this project with monthly tithings. Please click here if you would like to set up a monthly donation.

As of 17 December 2021 Pristine Pathways is still going strong, cleaning up Constantia 4 days a week.

With their new bicycles, the team have increased their reach and their efficiency, cleaning an average of 22 bags a day, with a peak of 36 bags cleaned on 14 December. This week, which included a public holiday, they removed a total of 80 bags of waste from the suburb after removing 93 bags the previous week (6-9 December).

Their impact on Gugulethu is also significant, with 40 bags of waste cleaned on Friday 10 December 2021 from an illegal dumping hotpot beside the Klipfontein road, close to an early childhood development center. We have decided to focus their work at this one specific location in Gugulethu whenever needed, at least for now. On Friday 17 December cleaning was not needed at this location, so the team cleaned 47 bags of waste from a dumping site beside the Gugulethu cemetary.

Look out for our teardrop banners around Constantia where we are working!

January is the final month of the pilot project.

The pristine Pathways Team hit the ground running at the start of 2022, removing 61 bags of rubbish from Constantia in the first week. They continue to work closely with the Constantia Watch to keep the streets safe and report any suspicious activity to CW.

The project also continues to help keep Gugulethu clean. On 7 January 37 bags of waste were cleaned from the streets outside Intshinga Primary school. Cleanups like this are vital to protect the health of the children of Gugulethu.

We are hopeful and optimistic that we will make Pristine Pathways a permanent project. Over 3 months our team has collected over 1030 bags of rubbish from Constantia. While keeping an eye out for any suspicious activity in the area, the team doesn’t only clean the streets, but the green belts as well, improving the experience of Constantia for residents and visitors. Keep an eye out for our tear-drop banners where the team is hard at work!

The project is also making a significant difference to the litter and dumped waste that pollutes Gugulethu. Over the last three Friday’s in January, 33, 40, and 53 bags of waste were cleaned. This brings the total number of bags cleaned from Gugulethu over the pilot project to a whopping 474 bags.

We believe that consistent monitoring and reporting are key to the success of a project like this and we track every day’s work carried out by our team. Check out some graphs below of the cleaning that took place over the pilot period in Constantia and Gugulethu.

February 2022 turned up the heat in Cape Town.

The intermittent heat waves hitting the mother city do not deter our team, Ernest and Thando, from working hard to keep Constantia valley clean. Over this month, they cleaned 382 bags of rubbish (averaging 24 bags per day) from the area, while always keeping a lookout for any suspicious activity. The Constantia Watch has also started advising the team of areas where they are needed, to help improve our impact. If you see the team at work (you can easily find them from our banners) don’t hesitate to offer a greeting and let them know what you think of their work!

In Gugulethu, the team has been concentrating most of their work on a pathway alongside a cemetery which is frequently used as an illegal dumping site. They cleaned this location on 3 of the Fridays in Feb and cleared a total of 147 bags of waste. This hard-working team manages to clean an average of 37 bags of waste per day in Gugulethu. Pristine Earth Collective is engaging with the community and looking into ways to prevent illegal dumping at this and other sites in Gugulethu. Please get in touch if you can sponsor paint, or plants to beautify public spaces and discourage dumping, or if you can donate old tires to create barriers to dumping vehicles.

Get to know our Team a little better:

Meet Ernest, who grew up in Gugulethu as one of three kids. His hobbies include hiking,
swimming, and reading. He is also the proud father of two kids, a girl, and a boy. Ernest hopes
to one day manage his very own panel shop. In the meantime, you’ll see him cycling around the valley, working diligently in keeping the area clean.

Ernest quotes: “What I enjoy about my job is that it makes me feel I’m making a big difference in the fight against litter and taking care of the earth. It makes me proud of myself to be part of the people who clean the streets.”

Meet Thando, who defines himself as a dedicated family man. When he’s not patrolling the streets, you can find Thando playing soccer, watching movies, playing TV games, swimming, and listening to music all day. His mission for 2022 is to become the best version of himself, achieving his personal life goals.

Thando quotes: “This project is benefiting me and my community by keeping it clean every day in each
area. It makes me happy to wake up in the morning and see a clean community. Even though it is a big
area, I enjoy cleaning Constantia as it’s quiet, safe and we get compliments from the residents living
there every day.”

In March we celebrate Human Rights

Section 24 of the Constitution provides that everyone has the right to a healthy environment, and also the right to have the environment protected from pollution and ecological degradation, which promotes conservation and secures ecologically sustainable development. Thankfully, Pristine Pathways helps to protect this right, both for the residents of Constantia and for the people of Gugulethu as well.

Over this month, the Pristine Pathways team has cleaned 43 (Earnest was working alone in the first week as Thando was injured), 68, 76, 65, and 61 bags of waste from Constantia, bringing the total for the month to 304 bags! Just imagine how all of that rubbish would still be blowing around Constantia were it not for this project and Earnest and Thando’s hard work!

The project continues to have a positive impact on Gugulethu. The other location where the team often cleans is an illegal dumping hotpot beside Klipfontein road, close to an early childhood development center. On the 18th of February and March, they cleared 69 bags of rubbish from this location.

Over the other Fridays in March the team focussed their efforts on the pathway next to the cemetery. They managed to clean 92 bags of rubbish from this location this month.

Despite all the public holidays in April, the team cleaned 305 bags of rubbish from Constantia.

Notable areas of focus in the valley this month were Rhodes drive, Silverhurst Trail, and the area at the fly-over on M3. The team manage to clean an average of 80 bags of waste a week, all of which would likely still be in the environment, were it not for this project.

The team only cleaned over three Fridays in April, but they still managed to remove 91 bags of waste from the 2 focus areas in Gugulethu.

Over May, the team managed to clean an average of 78 bags a week from Constantia.

In total, Thando and Earnest cleaned 330 bags of waste from the valley in May. We update the team with hotspots to clean from Constantia Watch, one of our partners and sponsors, and that we notice in the area. Please get in touch if you notice any litter hotspots in Constantia which could use a cleaning.

In Gugulethu, the team is still focussing most of their effort on the pathway next to the cemetery, since rubbish is regularly dumped here. We are hoping to erect measures to prevent dumping at this location soon. Please get in touch if you can sponsor paint, plants, or used tires to get this done. They cleaned 86 bags of waste from this pathway in May, as well as 2 other locations, bringing the total number of bags cleaned from Gugulethu in May to 150.

Despite the cold and rain, the Pristine Pathways team managed to clean 306 bags of waste from Constantia over June.

The very heavy rains and public holidays in the second week of the month did interfere with work a bit, but still, the team managed to make a significant impact on the litter in the suburb, averaging 64 bags of rubbish cleaned a week. They also always keep a careful lookout for any suspicious activity, with a close connection to the Constantia Watch.

The consistency of their work in Gugulethu is necessary, as illegal dumping is such a pervasive problem in unserviced areas like this. This is why Earnest and Thando generally concentrate their cleaning on specific hotspots in Gugs, to try to keep them clean. Over 3 Fridays in June, they managed to clean up 115 bags of rubbish from the community.

July was a cold wet month in Cape Town

But nevertheless, Thando and Earnest persisted in cleaning up Constantia and managed to remove 307 bags of waste over the month, averaging 77 bags per week. This has certainly made a noticeable impact on the suburb! When you are in Constantia, look out for the banners they erect where they are working.

Over July, the team managed to clean 165 bags of waste from Gugulethu and they continued to focus on the two previously identified dumping hotspots, as well as a few other areas.